This paper presents the experimental study of eccentrically loaded reinforced concrete columns with an added 35 mm self-compacting concrete jacket attached to the column’s most compressed face using wedge bolts. Nine columns with a 2000 mm height were tested under compression and one-way bending until failure. Columns were denominated as original column (PO) with a cross section of 120 mm x 250 mm; reference column (PR) with a cross section of 155 mm x 250 mm, and seven columns with an initial cross section of 120 mm x 250 mm and later reinforced by the addition of 35 mm self-compacting concrete layer and various configurations of wedge bolts. Except for the original column PO, the columns were submitted to a 42.5 mm load eccentricity due to the added concrete layer at the compressed face. Although failure of the wedge bolts did not occur, it was not possible to prevent detachment of the added layer. The results indicate that it is possible to structurally rehabilitate reinforce concrete columns with the use of the strengthening methodology used in this research, resulting in average ultimate load capacity gains of 271 % compared to original column’s ultimate load. 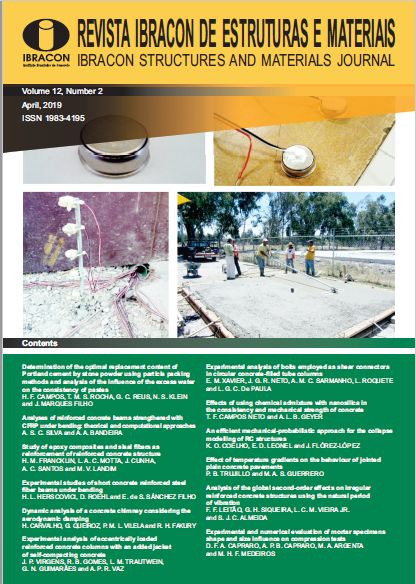