High strength concrete (HSC) has found many applications in civil engineering structures such as in high-rise buildings, and bridges. The mechanical properties of HSC are sometimes different than properties of normal strength concrete (NSC). In particular, HSC possess lower creep strains than NSC. As a result, members constructed using HSC have been found to deflect less under sustained long-term loads. However, the formula used by current ACI code (ACI 318-14) for predicting the long-term deflections doesn’t account for effects of HSC. This study aims to present a theoretical formula to calculate the long-term deflections for reinforced concrete beams made from NSC and HSC, taking into account the influence of HSC. The formula was derived from trial fitting of long-term deflections obtained from several experimental tests available in the literature. The presented equation considers the effects of several factors, such as compressive strength of concrete, reinforcement at compressive zone, cross section dimensions, and span’s length, found in the experiments to have significant impact on long-term deflections. The results of the equation were compared with experimental results of other researchers, and a good agreement was obtained. Following a parametric study, the long-term deflections were found to decrease to about 50% when increasing the concrete’s compressive strength from 20 to 100 MPa (2900 to 14500 psi). The compressive steel reinforcement was found less effective in the case of HSC. The deflection increased linearly with the ratio of (span to cross section perimeter). 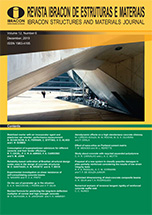